We sent out emails to around 200 active users. The offer was for a free coupon worth LKR 10,700/-. Here’s what happened.

The average open-rate of emails across all industries is said to be about 21.33%, and the click-through rate at 2.62%. – Courtesy of Mailchimp.

On behalf of one of the brands, we launched an email campaign to around 200 (filtered*) users, sending multiple variations of one email with the same offer.

The variations were re-scripted, and re-engineered, starting from the sender’s email id, the email subject, the content, the CTA (call-to-action), etc…

The FIRST email (last row on image below) we sent was hugely engineered to focus and promote the special offer.

And it turns out it competitively performed the worst.

Here’s what I’m talking about: 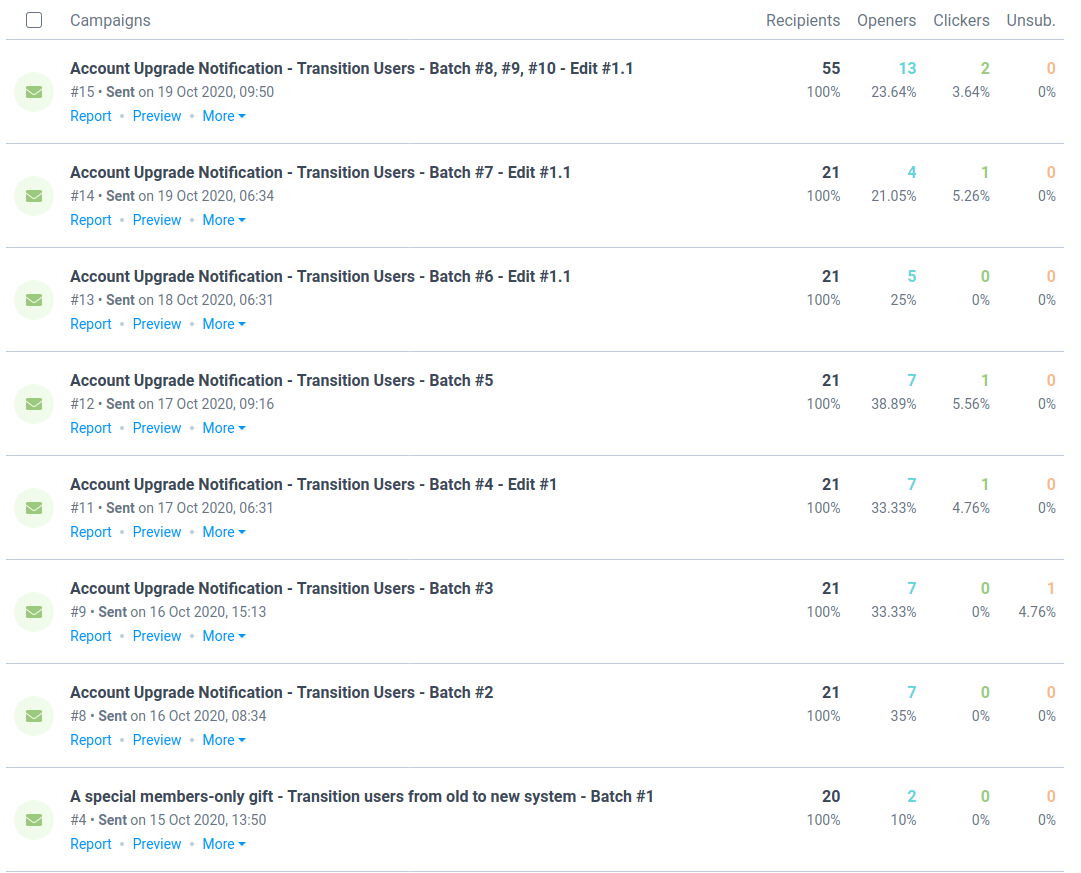 The titles you see in the image above, are just internal descriptions for us to identify at a glance which emails are which.

Approximately 200 contacts were broken down into batches, hence the Batch numbers. So as to experiment figure out which variations perform the best, and which ones get popped.

Bearing in mind that the average open rate of emails is said to be around 21.33%, the emails we sent have performed well on the average scale, apart from the FIRST email (last row in the image above) that was sent.

So why did the first email perform the worst?

Here’s a little piece of insight; If you’re a Gmail user, you’re likely to have noticed Gmail’s Primary, Social, and Promotions tabs.

Just like SEO for search engines, Gmail does a bit of jugglery with emails.

Unless a Gmail user has disabled the multiple tabs, an email that is more “promotions like” is dumped under the Promotions tab. And that could lead to the email being completely ignored. Out of sight, out off mind.

If the email sent is finely personalised, Gmail’s filters are more likely to pop the email under Primary, rather than under Promotions.

Say for example we want to email people and ask them to leave a review on a product they purchased.

…it’s more likely that the emails get knocked into Promotions or another tab. Increasing the likelihood of being forgotten and ignored.

We want those emails falling under the Primary tab. So here’s how we could rework that…

In the second scenario, the primary strategy to personalisation is to send the email from the company/brand’s ambassador, a company’s spokesperson, etc… We’ve selected Mohamed Salah in this scenario.**

Not just the sender’s name, even the sender’s email ID, the subject line, and preview text, the body of the email, all have to reflect this personalisation. This also helps increase the trust factor of such an email.

%recipient-name%, is the example recipient of this email. And therefore, the subject line includes this.

And the CTA (call-to-action) would likewise be engineered to be neutral and personalised. Hence, the button would say “Leave Review” instead of “Review Now!” – Just an example. Not that “Review Now!” is suitable for a review request.

So would it work?

Or would it drop the re-engineered email into Promotions yet again?

Well, the emails we re-engineered, and sent out afterwards, greatly focusing on particular touchpoints. And guess what; The benchmark of an average open rate is 21.33%, we went beyond as soon as we personalised the email, and switched focus from promotional text, to more one-on-one direct texts that kind of “required” recipient action.

Next time you launch email campaigns, break down your contact list into segments based on interest, and those segments into batches, and focus on email personalisation. Trial the batches of contacts with different variations, until you figure out which ones work the best. Don’t get dumped in Promotions. Get listed as Primary. It matters.

*Finely tuned because websites tend to have many bot signups / submissions. And algorithms and pieces of code are occasionally reworked to deter these automated attempts, and tighten the noose towards verification & validation.

Note: This email campaign displayed in the image, was launched using Sendinblue.